We have a date scheduled for the FET. It is set for March 25 which is almost a week later than I anticipated. The later date is due to Dr. Gentry's schedule. He won't be in Evansville that week and we kind of need him there! I have to take 6 extra days of shots to accommodate the change but I don't mind. I just hope this cycle works! Please keep us in your thoughts and prayers!
Posted by Carrie at 1:58 PM 2 comments:

A little bit of good news

I was a little bummed because the packaging on the antibiotic I was prescribed to treat a UTI said that it could not be taken at the same time as fertility meds. I decided to call Dr. Gentry's nurse to find out why and she said that because Lupron isn't an actual fertility medication I can take it at the same time as the antibiotic and we can go ahead with the protocol for the frozen embryo transfer (FET)! I am so excited! I will take my first Lupron shot tonight and will continue for another 25 days!
Posted by Carrie at 8:52 PM No comments: 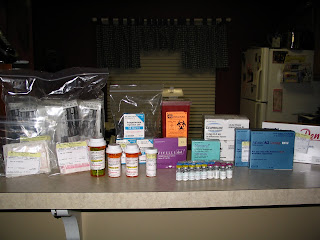 David and I met in 1995 at Wesselman's Supermarket. We became friends and talked to one another quite often. Fast forward to early 1996 when the words "It's you fool" changed the course of our relationship forever. We were just two crazy kids who had their whole lives ahead of us. We waited quite a while to get married but happily tied the knot, after 7 years of dating, on May 17, 2003. David and I decided to start a family immediately. So....we tried. And tried. And tried. The early "infertility" years are kind of hazy to me these days but to sum it up we ended up trying the fertility drug Clomid for several months with no luck and then in August of 2005 I diagnosed with polycystic ovarian syndrome (PCOS) and told by my OBGYN that I would have to go to a fertility specialist. This starts what I like to call the Dr. Gentry years.

We met Dr. Gentry for the first time in October 2005. I was given medicine to treat PCOS and was told that I had to take the medication for one month before we would start any fertility medications. In November we did yet another round of Clomid , this time under the care of Dr. Gentry. I was told the Clomid didn't work properly and that my body did not grow any eggs that were "mature" enough to release out of my ovaries. Bummer. Our next course of action is to start injectable medications but we will have to wait out a cycle to let my body rest.

Between April 2006 and December 2007 we did multiple rounds of injectable medications in conjunction with IUI (also known as artificial insemination) but all of these cycles ended in bitter disappoinment and we realized that it was time to move on to In-Vitro Fertilization (IVF). I never dreamed that we would have to go this far to have a baby and I even struggled with the decision a little bit because, as a Catholic, IVF is a sin. In the end my desire won out. Here is how it went:

February 2008 - Test done on uterus to check for polyps, lesions, cysts or anything else that might prevent implantation. I aced that one!
March 2008 - Started injections to suppress my natural hormone functions
April 2008 - Started follicle (egg) stimulating injections, 2 to be exact. That makes 3 shots a day. Then another 2 pills on top of that. Very fun!
April 15 - IVF 1 canceled because my estrogen level plummeted. Of course I'm difficult and can't be a normal case. Dr. Gentry says he has never had this happen before. We'll try again.
May/June - Long story short - read above. Same protocol same result. Cancellation. Ugh. IVF 2 down the drain.
At this point we decide that we are going to take a LONG break and try again when we get back from our family vacation to Disney World. We made this decision because contrary to popular belief, giving yourself 3 shots a day isn't very fun! During this long break, I'm determined to make the next attempt work so I stop drinking soft drinks, start drinking water only, give up sweets and lose 25 pounds in the process. This next attempt just has to work now!
October 2008 - IVF 3 Will we make it to retrieval this time???? Yes! After taking all the injections listed above we successfully grew eggs without my estrogen dropping, hooray! On Nov 1st 20 eggs were retrieved, 17 were mature, 13 fertilized! On Nov 5th two of the best quality embryos were transferred into my uterus (according to Dr. Gentry, the nurse and the embryologist those 2 embryos were EXCELLENT quality so this gave us great hope that they would implant)
Now we have to wait until Nov 19th to find out if we are pregnant.

In the meantime, we find out that 5 of the 11 remaining embryos continued developing and were viable enough to cryopreserve for future use.

December 2, 2008 Based on the excellent quality of the embryos he transferred, Dr. Gentry is having a difficult time believing that I'm not pregnant and feels that there MUST be something wrong with my uterus that is keeping the embryos from implanting. I am sent to St. Mary's for an MRI.

December 5, 2008 Of course the MRI comes back clear. There is nothing wrong with my uterus. It's just "one of those things" and we'll have to try again. Sheesh!

So anyway, that's the not-so-brief history of my and David's attempt to start a family. Our story is full of ups and downs and a lot of heartache. Fortunately, we aren't alone. We have great family and friends who have been with us each and every step of the way.

Now that everyone is up to date on the history, this blog will serve as way to keep readers up to speed with our current attempts! If you have any questions about a particular procedure, don't hesitate to ask. I didn't want to put too much detail into the story for the fear of TMI!

Posted by Carrie at 7:15 PM No comments:

David and I have 5 embryos that were left over from the in vitro cycle we did in October. The embryos were frozen for future use and we decided to do a frozen embryo transfer as our next attempt to get pregnant. Just as I'm getting ready to start the medications that need to be taken during this process I develop a urinary tract infection and have a prescription called in. I just picked the pills up from Walgreen's and in BIG BOLD letters emphasized by a green highlighter I see the words CHECK FOR PREGNANCY AND USE OF FERTILITY MEDICATIONS. I absolutely cannot take this antibiotic with fertility meds. Of course I can't! Well I guess we'll try again next month.
Posted by Carrie at 7:00 PM No comments: